When William Ford died, Leslie returned to take care of the family business delivering a wide range of goods to Lackford, Higham, Flempton, Tuddenham and Cavenham. His stock included groceries, medicines, clothing, blankets and kitchenware. Leslie as the last shopkeeper in Cavenham recalls memories of the business:

My father moved into the village store/Post Office in 1921, before then my uncle had it, so it has been in the family for over 100 years. 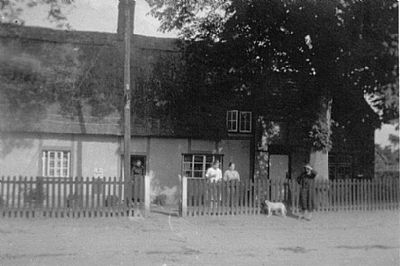 I had a varied life. Left West Suffolk Grammar School at 16, then apprentice at furnishing store of Plumptons. After that Bedford Gammons of Bedford, then Cheltenham followed by Stroud, then came back to Bedfords. Then war broke out and went into the army for 4 and a 1/2 years. Was offered the management of Plumptons furnishing department after the war and stayed there a year or two.

Father died suddenly and went back to run the family business which in those days was a general store, selling everything from cod liver oil to saucepans and drapery. We used to do rounds and everything else - the post office of course.

We sold all grocery lines of course, all medicines. I've still got some Beechams pills - 4 in a little wrap, clothing, blankets, all the kitchenware and cups and saucers, everything you can think of.

The shop also sold carbide (gas fuel) in small tins for bicycle lamps and medical pills in twists of 4. 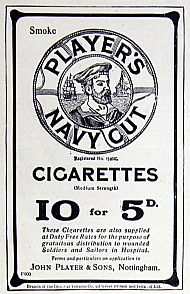 One customer used to come in every day for 20 Players and a strip of 5 aspro.. every day... Chewing tobacco was sold in long sticks which they often worked in the palms of the hands to put in their pipes.

We used to sell to everyone in the village, plus we used to do rounds outside, different villages, Tuddenham, Higham, Lackford, go as far as Flempton. It was common to travel around and deliver goods to people’s doors.

My father was the first person to have a car in the village other than the Hall where General Brigadier Home had one. It was an open touring Singer. Celluloid screens on the side to keep out the wind. He started with a model T-Ford van and before we had a bigger van it was converted so that he could do his grocery rounds.

Then, of course, he transported people about - the cricket team.

The seats would drop down at the side and he would take 10/12 people in it. Then war came and it was taken by the government as an ambulance. I don't know where it went after it left here.

Anyway, I carried on until I closed the shop down and kept the Post Office going until last year (1999).

You were awarded an MBE

I didn't believe it. They notify you in November for the New Year’s Honours list and this letter came with P.M. office on the bottom of it and you look at it 3 times to make sure what it is. It says this is the only correspondence you will have so you never know. It also says strictly confidential, so I didn't even tell the wife - this was in November and I didn't tell her. I had to keep it secret. Once you start it goes on and on so I thought I'd better say nothing, and I didn't say nothing until the day before when I said you've got to watch the news and things a bit.

Anyway as I was saying, as well as running the stores I had taxis running at Lakenheath, and also a Poultry farm one here and one at Barton Mills and so we carried on with those.

The poultry farm was on the ground opposite here, so I got a living once I closed the general stores.

Back of course in the early days, we were the only telephone in the village. The number of our telephone was Cavenham 1. There was a little sign on the chestnut tree a blue and white sign saying you may telephone from here.

It wasn't a novelty because that’s how you were brought up. We were the only car and telephone in the village and that was the norm. There were no tarmac roads, they were pure and simply flint and sand.

The kids were playing in the streets. Tops and hoops up and down the street. All the dogs were running about free. It was mainly horse and cart then.

When you are involved in public service life people run to you with all their little problems and you have to help things along as much as you can in this life. Over the years we knew most people. People would come in and say have you heard so and so - no. You probably knew it a fortnight beforehand, but you never knew anything.

There is no community spirit at all nowadays to what it was in those days. Strange as it may seem although we didn't close the post office down until last year and it’s only a small village - I'd bet that 1/2 the village never came through the door.

I also used to do a postal delivery, there was no mechanical mail system - I used to do it here.

We used to have the mail come in at 5.30 in the morning, a postman on a bicycle who used to come from Icklingham would sort his mail here and take it back again, and I'd sort mine and deliver it. In those days, of course, I knew every person and every dog in the village, every crack in the door because half of them used not to have letterboxes - you used to push the letters through cracks in the door.

Before my time my father used to go to Bury every Wednesday and people used to say can you go to the chemist and get me this or can you go to such and such a shop and bring this back we used to charge them sixpence for the service.

It was an estate village, General Home owned everything even the pub. The only building he didn't own was the church. There was a quality of life in those days they really used to look after people in those days. I remember when I was a child in about the '20s on Christmas Eve they had a wonderful Christmas Party up at the village hall. Christmas tree that touched the roof, I shall never forget it, you know what it’s like for a kid.

They had a tea and all the jellies and cakes and everything else and there was piles of presents and about 8 pm Brigadier General Home and Lady Home would all come down from the Hall after they had had dinner. It was magic in those days; you don't get that quality of life nowadays do you.

They didn't have anything to do with the village on the day to day efforts. It was only special occasions. They owned everything and practically everybody worked for them. That's when farming employed a lot of people. It was a very close-knit community. I can't think of anybody who wasn't employed by the estate in those days, other than ourselves of course!

It was chaotic here during the war. Queues used to stretch right down from that door 1/2 way to the Plough and mailbag after mailbag used to go out.

All the locals if they wanted a present to send to somebody they'd send pheasants or rabbits - loads of them used to go and all they did for a brace of pheasants was tie the 2 necks together didn't wrap them up and put them in the mailbag and a rabbit used to go with a brown paper wrapping around its middle part with its head sticking out one end and its tail the other. They weren't boxed and done up. They were just sent loose - no end of them.

During the war, it was very busy. This was a bomber base up the road. It was one of the Fido bases. I think there were 3 in the country. It was a fog dispersal unit. Obviously you didn't have flare paths during the war because of the darkness and all that but when there was heavy fog and all that and you couldn't land at Mildenhall or no end of other places they used to light these FIDO things up which was gasoline and it would be as bright as day, to bring in crippled planes and things like that.

Up the Higham road on the corner of the Higham crossroads there. You know as you go up the avenue, just as you leave the trees there's quite a little thicket on the right. There is a bunker there where they used to control the dummy airfield. They used to press a button and shine the odd light here and there and Jerry would put bombs on it.

We went to the shelter several times. I didn't experience too much as I was in service myself, but in the 1940's Jerry was quite active around here. One night I woke up and my bedroom was out towards the airfield and it was bright as day.

There was several boys I knew that went into the Suffolks. Two from one family lost their lives in Singapore. Yes, all the people the right age had to go.

After the war they made this a THOR rocket site, so we had rockets here. As a matter of fact, when the Cuban Crisis was on we were very near war then.

There were 3 THOR rockets, and I stood out here one day and all 3 of them were pointing skywards and they were absolutely ready to fire all the vapour coming from the base up, and they were on standby ready for someone to press the button. That’s how near we were to war.

Obviously they were targeted on Russia as that's where the danger was in those days, but as history has shown us now East Anglia as such would have disappeared as Russia had targeted us for a wipeout, what with the American bases etc.

I've still got some ration books kicking about, mainly it was in my father’s time as I was in the forces. There were coupons of all sorts. It carried on after the war a lot of the rationing did, It didn't stop immediately because we hadn't got the food or goods to supply the general public, so it was rationed.

Food supplies came through the normal channels. Brooke Bond tea came every week and B.P. and Shell used to deliver petrol in 2-gallon cans. Nowadays its go to the pump and help yourself. There was the system in those days they delivered to people and that was how you ran your vehicle.