History of the Lackford & Cavenham Estates

The present day Lackford & Cavenham Estate was originally two separate farms, each with their own rich and colourful history. The two estates were amalgamated just after the end of the Second World War, by Douglas William Phil Gough. The farming business he established is now run by Robert Gough, the third generation of the family.

The Lackford Estate for many years formed a part of the much larger Culford Estate. Bought in 1889 by the 5th Earl of Cadogan, it was eventually sold upon the death of the 6th Earl, Gerald Cadogan in 1933. The original family home is now an independent boarding school, and their family seat gave name to the school's "Cadogan House", as well as the Cadogan Arms public house at Ingham. The Culford Estate was divided up into lots upon sale at auction, and the Lackford Estate was successfully bid-for by Suffolk maltster and farmer Duncan Smith Gough in 1936. Ill-health eventually led Duncan to sell the farm to Douglas Gough, his cousin, in 1943.

Douglas purchased the 2,627-acre Cavenham Park Estate at auction on 20th June 1946. With the estate came Cavenham Hall, an imposing country residence extended in 1899 for the Goldsmith family who resided there until the end of World War I. Frank Goldsmith then sold the estate to Brigadier-General Sir Archibald Home and moved to France. Frank's son Sir James, the financier and entrepreneur, founded Cavenham Foods in 1965, a business named after his family's former Suffolk home.

Cavenham Hall was to become home for a short while for Douglas, his wife Violet and their two children Diana and Richard, before they moved to Lackford Manor in 1948 and so the Hall, was subsequently put up for sale. Despite trying to sell the house as a country residence, and even as a building to establish a public school, it became apparent to Douglas that the tough economic conditions at the end of WWII would not be conducive to a sale. With the house starting to fall into a state of disrepair after just fifty years, Cavenham Hall was demolished for reclamation in 1949.

Douglas was a hugely experienced farmer and landowner. He was born at Gesyns Farm, Wickhambrook in 1898 before the family then moved at the turn of the century to farm at Fornham All Saints. He served in France with the King's Royal Rifle Corps during the Great War before returning to Suffolk and then began farming at Pakenham Manor, where he spent the best part of thirty years. Over that time he farmed on an intensive scale and founded the Pakenham herd of Large Black pigs. He won countless awards at livestock shows the length and breadth of the country. Douglas was also a fine sportsman and excellent shot, and when the opportunity to purchase the Lackford Estate renowned for its sporting excellence arose, he had no hesitation in making the move.

He was able to expand his farming business when the Cavenham Estate went to market, the additional land meant that he was farming just over 3,000 acres. This allowed him to make a strong feature of breeding new stocks of pigs, cattle and sheep. He bought in a new herd of Ayrshire cattle, and having decided to dispose of his Large Black's, Douglas then set about working with his stockman Reg Simpkin to establish a herd of Landrace pigs. He also spent the following years building up a large and diverse flock of sheep with his shepherd Phillip Wadman both for pedigree and commercial purposes. They initially grazed and bred Clun Forest and Southdown sheep, but after Wadman returned to his native West Country in the mid-1950s, new estate shepherd Ken Riggall took charge of an expanded flock of Suffolk sheep. The flock would go on to win countless first prize and championship awards at regional shows up and down the country, and even won the National Flock Award in 1960. The Estate was also regularly exporting their prized sheep to Europe and South Africa.

Douglas's influence in business spread much further than his estate, being a Council member of the Royal Agricultural Association and the Smithfield Association. He was director of the Suffolk County Show in 1938, 1947 and 1951, before becoming a very popular President of the Suffolk Agricultural Association in 1954 with the Lackford & Cavenham Estate playing host to the Suffolk Show that very year. Away from the farm, his main passion was football. He was vice-Chairman of Bury Town Football Club, before being appointed a director at Norwich City FC in 1938 where he remained until shortly before his death in 1958.

By the 1960s, the Estate had passed on to the second generation of Gough's. Richard, more affectionately known to everyone as Dick, took over the running of the farm not long after having completed his National Service in the RAF. It was very much business as usual with both the arable and livestock sides.

Wheat, barley and sugar beet were the main staple of crops grown, whilst a dairy and beef herd were consolidated at Cavenham. Dick's main passion was for pigs, and whilst a lot of time and resource was spent building up the pedigree herd of Landrace pigs at Lackford, the decision was taken to scale the commercial sheep flock operation right back.

Dick, alongside his head-stockman Reg Simpkin, forged a formidable partnership with their pedigree and breeding stock of pigs during the 60s, 70s and 80s. The pigs were in constant demand for export, with stock regularly shipped to Holland, Germany, Japan and Taiwan. Whilst also keeping a herd of Large White, it was the Pakenham Landrace herd that would receive regular recognition at the major agricultural shows. Dick and Reg enjoyed countless championship successes at the Royal Smithfield, the Royal Show at Stoneleigh, the Royal Bath & West, Royal Norfolk and Suffolk Shows. Indeed such was Dick's championship success over the decades that he was introduced to the Queen and Queen Mother at Earls Court in London, and as an inter-breed champion exhibitor, he met Diana, Princess of Wales at the Suffolk Show in 1986. Richard's son Robert lives in Park Farm, Cavenham.

Sections of the estate have since been sold:

Lark Hall Farm with 604 acres was sold in 1958, with 250 acres on Tuddenham Hill sold in 1998. The heath and quarry were requisitioned by the War Office during the 2nd World War. 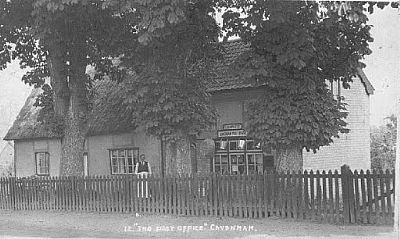 Of the combined land 1,000 acres are woodland, 40 acres leased for pig farming and a larger portion for potato and onion crops. The Cavenham Estate currently has 420 head of cattle cared for by two dairymen. The farm also employs one agricultural worker and a gamekeeper. Two further employees from Lackford work on the combined estates.